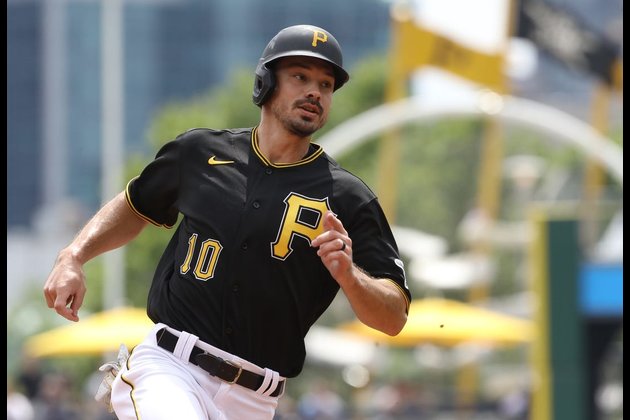 Bryan Reynolds ripped an RBI double in the 10th inning and scored on a wild pitch as the Pittsburgh Pirates completed a three-game sweep of the visiting Milwaukee Brewers with a 5-4 win on Thursday.

After Milwaukee scored in the top of the 10th, Reynolds doubled into the right-field corner to score automatic runner Tucupita Marcano. Pittsburgh loaded the bases on two intentional walks and, with Michael Chavis at bat, Reynolds scored on a wild pitch by Matt Bush (2-2).

Marcano and Ben Gamel each had an RBI single for the Pirates.

Duane Underwood Jr. (1-3) picked up the win despite giving up one run in the top of the 10th inning.

Milwaukee took a 4-3 lead in the top of the 10th when Kolten Wong was hit by a pitch with the bases loaded.

In the second, Greg Allen had a one-out base hit and went to second on Jason Delay's single. Allen advanced to third on a wild pitch and scored on Caratini's passed ball for a 1-0 Pirates lead.

Caratini got some redemption when he led off the third with his eighth homer of the season to forge a 1-1 tie.

Hunter Renfroe led off the fifth inning with a double and moved to third on Caratini's groundout. Brosseau followed with his fifth homer to stake Milwaukee to a 3-1 lead.

With Allen batting to lead off the bottom of the seventh, Brewers designated hitter Christian Yelich was ejected while in the dugout by home plate umpire Jerry Meals. Milwaukee manager Craig Counsell also was tossed from the game.

Allen went on to walk, moved to third an out later on Delay's single and scored on Marcano's single. That chased Woodruff, and Gamel tied the contest at 3-3 with a single to drive in Delay.

ZAGREB, Croatia: Authorities have said that a weekend bus crash near Varazdin in Croatia killed 12 passengers and injured 32.The ...

US, India to hold military exercise near disputed Chinese border

WASHINGTON D.C.: The U.S. will participate in a joint military exercise in mid-October with India, less than 62 miles from ...

MOSCOW, Russia: A leading Russian scientist in the field of hypersonic flight, Dr. Alexander Shiplyuk, has been arrested on suspicion ...

Citing safety of children, LA to move homeless away from schools

LOS ANGELES, California: During a meeting that was disrupted by protesters this week, the Los Angeles City Council voted to ...

WASHINGTON D.C.: The U.S. Justice Department announced this week that former Puerto Rico governor Wanda Vazquez has been arrested in ...

Basketball icon Kobe Bryant and his young daughter died in a helicopter crash in early 2020Vanessa Bryant, the wife of ...

The Pittsburgh Pirates are fresh off a rare win over the Arizona Diamondbacks and now look to gain a split ...

Cardinals out to continue hot stretch vs. Rockies

A seven-game winning streak vaulted the St. Louis Cardinals into first place in the National League Central, but their grip ...

That Dylan Cease All-Star Game snub looks worse by the day, with the Chicago White Sox right-hander still sporting a ...

Rangers out to stick to plan in series finale vs. Astros

If the Texas Rangers were going to have any measure of success against Houston Astros right-hander Justin Verlander on Wednesday, ...

The Shape of Water