No. 3 Ohio State to provide stern test for Rutgers defense 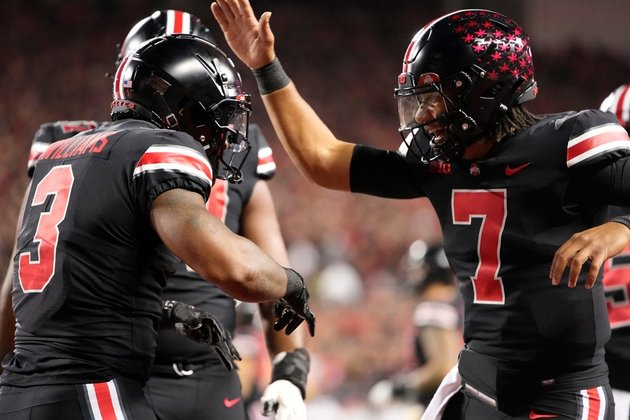 The fate of Saturday's game at Columbus, Ohio, could be decided at the coin toss when No. 3 Ohio State hosts Rutgers in a Big Ten Conference matchup.

Fast starts have been the norm for the Buckeyes (4-0, 1-0) the past two games, giving Rutgers (3-1, 0-1) fair warning if it wins the coin toss.The Scarlet Knights might want to consider receiving the opening kickoff and keeping the potent Ohio State offense off the field as long as possible.

In the Buckeyes' 77-21 victory against Toledo on Sept. 17, coach Ryan Day decided to receive the opening kickoff rather than deferring to the second half. Ohio State scored a touchdown on its first possession, and the next six possessions as well, while reaching the end zone on 11 of its first 12 drives.

When Wisconsin won the coin toss last week, the Badgers elected to kick off. Bad choice. The Buckeyes went 88 yards in six plays for a 7-0 lead, intercepted the Badgers on their first series and quickly scored again.

By halftime, the Buckeyes had four TDs and a field goal in their first five possessions en route to 52-21 win.

"We got into a good rhythm early on. We hit a couple of those passes, and that was big," Day said. "We got some movement in the run game. When you have that balance of run and pass, you can be more explosive because they can't focus in one area."

The Buckeyes are third nationally in scoring at 48.8 points per game, but Rutgers, whose head coach, Greg Schiano, was the defensive coordinator and associate head coach at Ohio State from 2016-18, will rely on its defense to stay in the game.

Schiano acknowledges Rutgers, which lost 27-10 to Iowa in its conference opener last week, hasn't faced a team the caliber of the Buckeyes.

Against Wisconsin, the Buckeyes had 10 plays of 10-plus yards on their first 14 snaps.

Another concern for Schiano is at quarterback. Senior Noah Vedral is recovering from surgery, and sophomore Gavin Wimsatt has been injured, leaving third-string sophomore Evan Simon as the lone scholarship QB vs. Iowa.

Simon was 28 of 49 for a career-high 300 yards, a touchdown and two interceptions, including a pick six, against the Hawkeyes.

"I think one thing you can say, he is a tough son of a gun now," Schiano said. "He stood in there and made some throws, and as he was letting it go, he was getting hit but he didn't flinch."

Schiano said Monday the status of Vedral and Wimsatt will be known later in the week.

For the Buckeyes, Day said starting cornerbacks Cam Brown and Denzel Burke and receiver Jaxon-Smith Njigba might return from injuries after sitting out the last game.