Tigers 3B Harold Castro has three hits, walks off Royals 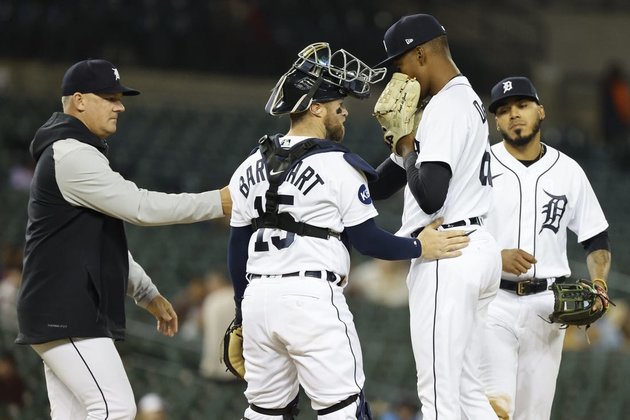 Harold Castro hit a two-out, bases-loaded single in the bottom of the 10th to give the Detroit Tigers a 4-3 victory over Kansas City on Tuesday.

Castro, who had three hits and drove in three runs, slapped an 0-2 pitch from Anthony Misiewicz (1-2) to bring home pinch-runner Ryan Kreidler. Riley Greene supplied two hits and an RBI for Detroit (61-92), which has won six of its last seven games.

Wentz got into trouble in the second by issuing a leadoff walk to Edward Olivares. Dozier then drilled his 12th homer of the season over the left field wall. Michael A. Taylor had a one-out double later in the frame but was left stranded.

Kansas City had runners in scoring position with two out in the third, but Wentz recovered to strike out Dozier.

The Royals extended their lead to 3-0 in the fourth when Taylor walked with one out and scored on Nate Eaton's triple to left center.

Kansas City had runners in scoring position in the sixth with two down. Jason Foley struck out Eaton to escape the jam. The Royals also left a runner at second in the seventh.

Detroit evened the score in the eighth. Spencer Torkelson walked against Dylan Coleman and beat the throw on Jonathan Schoop's fielder's choice grounder. One out later, Akil Baddoo's bunt single loaded the bases. Greene's infield hit knocked in the first run. After a strikeout, Castro lined an opposite-field single to bring in two runs and tie the game.