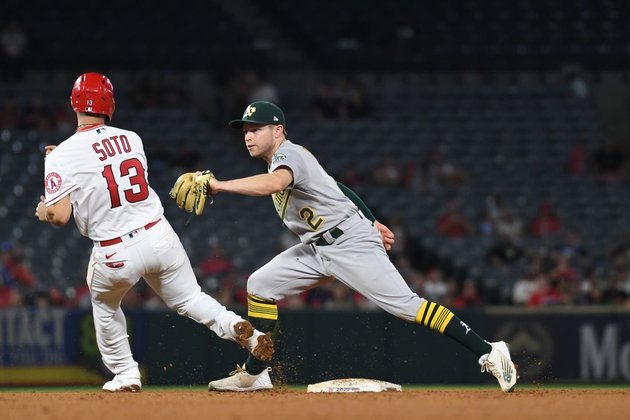 Jo Adell's RBI single in the bottom of the eighth inning drove in Matt Duffy from second base, lifting the Los Angeles Angels to a 4-3 victory over the Oakland Athletics on Tuesday night in Anaheim, Calif.

Adell also saved a run in the fifth inning when he made a leaping catch of a long fly ball to the left field wall, robbing Dermis Garcia of a home run.

Duffy got the winning rally started leading off the eighth when he was hit by a pitch from A's reliever A.J. Puk. Michael Stefanic sacrificed Duffy to second, bringing up Adell. Adell hit a hard grounder through the hole at short and into left field, driving Duffy home.

Oakland took the lead against Angels starter Patrick Sandoval in the second inning, loading the bases with one out on singles by Chad Pinder, Jordan Diaz and Shea Langeliers.

Cristian Pache followed with an infield single, scoring Pinder for the first run of the game. Nick Allen then drove in two more with a double, but Pache was thrown out at the plate trying to score from first.

The Angels responded with three runs in the bottom of the second to tie the game against A's starter James Kaprielian. Mike Ford led off the inning with a double and went to third on a single by Duffy.

Matt Thaiss drove in the Angels' first run with a single; and, one out later, Livan Soto's sacrifice fly made it 3-2. Luis Rengifo's two-out single scored Thaiss and tied the game at 3-3.

Both starters settled in from there, as neither allowed another run. Kaprielian went six innings, allowing three runs and 10 hits. He struck out five and did not walk a batter.

Sandoval gave up three runs on six hits and two walks in 5 1/3 innings, striking out four.